It’s been a crazy and thrilling year for Hello Stranger. We’ve seen growth beyond my wildest dreams and produced content that I’m incredibly proud of.

In January we released our debut record: Long Division. The response has been overwhelming. Since release, we’ve had hundreds of thousands of views and streams. Much of this has been driven by the performance videos Charley Button (LDC Productions) has produced for each track on the record (with the final one, “Victorious”, due later this month).

On the back of the record release, we’ve grown our social media following by the thousands. Through Facebook, Instagram, Twitter, and YouTube we’ve received more wonderful, generous comments than I could possibly list. It’s been truly inspiring and encouraged us to keep moving forward and write new music.

But 2018 wasn’t just about Long Division. We also self-recorded an acoustic EP that will be released early this year (2019). We played shows at a number of great venues in LA like Molly Malone’s and Bareburger Santa Monica. We were featured and interviewed for Deep Cuts Live on Pasadena Media.

All of these extraordinary experiences have given us the opportunity to hone our performances and songwriting as a group.

Which leads me to addition of Doug Slohm to Hello Stranger. Since joining, Doug has brought his incredible musical abilities  and instincts to HS as our new bassist and has contributed to the new songs we are writing for our forthcoming second album.

Like I said, it’s been a crazy year. And the event that perhaps best epitomizes this actually occurred early on in 2018 when we walked away from signing to a label. To preface, I think pretty much every musician harbors a fantasy of being signed and taking over the world. It’s admittedly an outdated dream, but one that persists in the minds of young rockers everywhere.

So when Hello Stranger was presented with just that opportunity and was forced to walk away from negotiations, the 13 year-old in me was screaming in protest. So here’s the story. Shortly after releasing Long Division, Hello Stranger entered into negotiations with a prominent indie label. They had signed some artists we admired and were familiar with and it seemed like the opportunity of a lifetime. Unfortunately, it soon became clear that both sides were looking for very different things and I made one of the hardest decisions of my life: to walk away from  a label contract.

And then, throughout the rest of the year, I watched many of my friends’ bands sign to various labels. Though they are profoundly deserving and I’m glad for them, it felt soul-crushing to not be on the same path.

But the truth is, I didn’t and don’t want to sign to something that won’t serve Hello Stranger in the long-term. I believe in this band and the music we are creating. I don’t want to sell my songs to a “Motown exec” or betray the kind of band we want to be. There’s a significant difference between making salable art and making a soulless product.

The response to Long Division has proven there are people in the world who care about what we are doing and I can’t wait to deliver LP2 to them. Yet, walking away from a dream I’ve had for over 15 years was still agonizing. I hope that this choice will pay off and I believe that 2019 will validate this belief.

“Hello Stranger are a fairly new band, who met in LA around 2015. Sam Deffenbaugh is the singer / guitarist, Daniel Rodriguez the drummer, Sam Plotkin also plays guitar and sings the harmonies and the band is rounded out by Doug Slohm on bass.

Listening to the album I cannot deny there is some massive appeal here. The songs are catchy (often damn catchy in fact), and Sam D has a voice that ought to make many a young girl take note. Well, I am not a young girl and and I still like the singing 🙂 . But there is more to this album: there are enough distorted guitars and variation at work throughout the album to keep me interested.
Still the band prove many times they are not a one trick pony. Where a song like Victorious has hit written all over it, The Flood is a riff monster waiting to explode. All The Things I’m Not sounds powerful, yet is carried by groove and a lighter sphere that works like a charm.

Most of the songs clock between 3 to 4 minutes, so will work in a radio format. I hope the band will get picked up, because they write quality songs that stick in your head and still manage to avoid the overly used clichés.

“Hello Stranger is the latest alt rock band from Los Angeles whose sound is extremely radio friendly.  Behind the charismatic and soaring voice of Sam Deffenbaugh, the band rocks out behind the stimulating drums of Daniel Rodriguez, the electrifying guitar of Deffenbaugh and the steady bass of Sam Plotkin (who also supplies great backing vocals).  They demonstrate that they understand their rock history, with obvious influence from bands like Crosby, Stills, Nash & Young on “All the Things I’m Not” and “Smiling in the Night,” among others.  From just listening to these great songs, we would love to see their live performance, as we can only imagine the energetic way they must be.  While we like the entire album, our favorite tracks include the two previously named, as well as “Virginia,” “Breakthrough,” “I Didn’t Speak for You,” “Ovation,” and “Victorious.”

Recommendation:  Get this one like your life depends upon it – they will make your day!”

Hello Stranger’s debut, Long Division, has been getting some excellent coverage recently. Check out these great reviews:

Indie Voice Blog
“Get this one like your life depends upon it – they will make your day!”

A&R Factory
“The soaring melodies and synergetic harmonies sit so tightly within each other, you’re brought to a higher plateau than you could ever reach listening to Nirvana. Yes, it’s a bold statement, but I’m sticking to it.”

Rock the Pigeon
“The three piece band clearly has a lot of chemistry and has created a really great sound to back the already great songwriting. The lead singers vocals are soothing during the verses and powerful during the chorus. It’s really refreshing to hear vocals that are more raw and real and a live band on a track!”

The Music Butcher
“Long Division is full of dramatic and eclectic tracks like this and shows why Hello Stranger has quickly grown such a strong following. ”

Divide and Conquer
“Overall, Hello Stranger works tight and well together as a trio and Long Division is a consistent album that’s well balanced and well produced.”

Listen Here Reviews
“Hello Stranger is a group that everyone should watch out for. In a scene like Los Angeles where its often hard to stand out, Long Division includes a few radio worthy songs that very well may make it on KROQ one day.”

No doubt you’ve already heard about this one. Your friends have told you it’s the worst record by an acclaimed band this side Chinese Democracy. The guy with the trendy facial hair at the corner coffee shop says it’s a masterpiece on par with Sgt. Pepper’s. The truth is…(appropriately understated drum roll please)…it’s fine.

Yes, Tranquility Base Hotel and Casino, for all the hype and furor surrounding it, is shockingly competent. All this general hullabaloo seems more directed at what Tranquility Base is not rather than what it is. It is not the commanding sequel to AM that we felt entitled to. It is not a magnificent showcase of the Arctic Monkeys rhythmic and melodic strengths. It is not the sea changing record that prerelease anticipation made it out to be.

So, what is Tranquility Base Hotel and Casino?

It’s a whimsical, conceptual, and highly lyrical exploration of interstellar lounge rock. It takes elements of the Monkey’s Suck It and See and AM and throws a huge dollop of David Bowie across the top. Likely owing to that last fact, Tranquility Base is largely the Alex Turner show. There were reports that the album was originally intended to be a solo record. We may never know the truth of the matter, but it’s easy to see where these rumors come from. There is very little space during the 40 min run time that isn’t taken up with Turner’s trademark British croon.

Moment to moment, this means that the record lives and dies on Turner’s lyricism and delivery. There’s certainly a ton of corniness to be found with lyrics like: “The world’s first ever monster truck front flip” and “cheeseburger, snowboarding.” But these stand alongside some of the most salient and political statements Turner has ever penned:

It’s easy to be entertained when Turner is dropping insights like these, but when he lapses into absurdity, the faults of the record become starkly apparently. Most prominently, the Monkey’s titanic drummer Matt Helders is criminally underutilized. Even on the more restrained AM, Helders found room to cut loose and provided numerous inventive grooves. Here his is mostly relegated to keeping time.

Furthermore, Turner’s piano playing, while certainly notable for his relative lack of experience, is not showy enough to match the weirdness of the tunes themselves. On that note, there’s the songwriting itself. There’s little in terms of dynamics or instrumentation to differentiate one song from another. The result is, again, that the sole point of interest is Turner’s lyrics.

What we’re left with is an album that feels like a bridge to something potentially magnificent just as Humbug was a bridge to AM. Yet, it’s even harder now to tell what the payoff for this uneven offering will be. At least we got Turner’s acerbic thoughts on Donald Trump: “The leader of the free world reminds you of a wrestler wearing tight golden trunks.” My thoughts exactly? 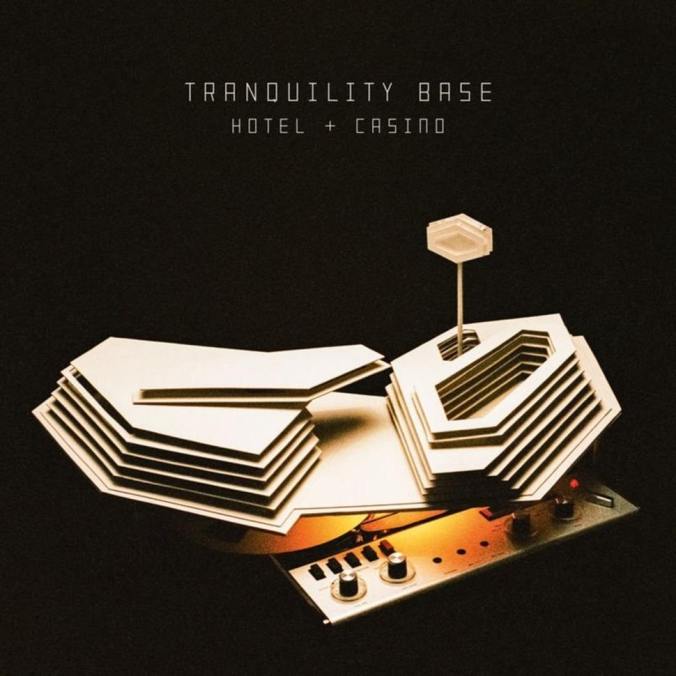 Much has been said about the evolution and adaptability of Baltimore duo, Wye Oak. However, the band’s consistency and singular vision is less often lauded. Since 2011’s breakout Civilian, Wye Oak has been on a tear releasing indie gems: Shriek, Tween, and now The Louder I Call, The Faster It Runs. So yes, this latest LP certainly stands alongside Wye Oak’s formidable catalog. Yet, ironically for a band that is constantly growing and improving, the quality of The Louder I Call, The Faster It Runs should have been easily predictable.

If Civilian was the morose masterpiece that launched Wye Oak’s career, then Shriek was where they solidified their greatness. With funky synth and bass grooves and ontological lyrics, Wye Oak elevated the high drama of Civilian to universal proportions. On The Louder I Call, The Faster It Runs, the band finds a delightful middle ground between the personal and the grandiose. There are still numerous moments of existential musing and angst, but this record largely a more upbeat and light hearted affair.

The excellent “Lifer” and “It Was Not Natural” evaluate various dimensions of interpersonal relationships, but tasteful string and synth textures punctuate the gloom. In that regard, the album is more Police than, say, The Cure.

At times this contrast feels weightless, as on “My Signal” or “Join.” However, The Louder I Call, The Faster It Runs is largely successful at balancing levity and concern. Even the title reflects this duality. Is the “It” a menacing force or an elusive goal? Wye Oak doesn’t explicitly answer this question, even on the titular track, but it is precisely this ambiguity (reflected in both the lyrics and music) that drives the record. The result is propulsive yet, effortless. The Louder I Call, The Faster It Runs stands tall in Wye Oak’s canon and indeed in the indie-rock canon as a whole. 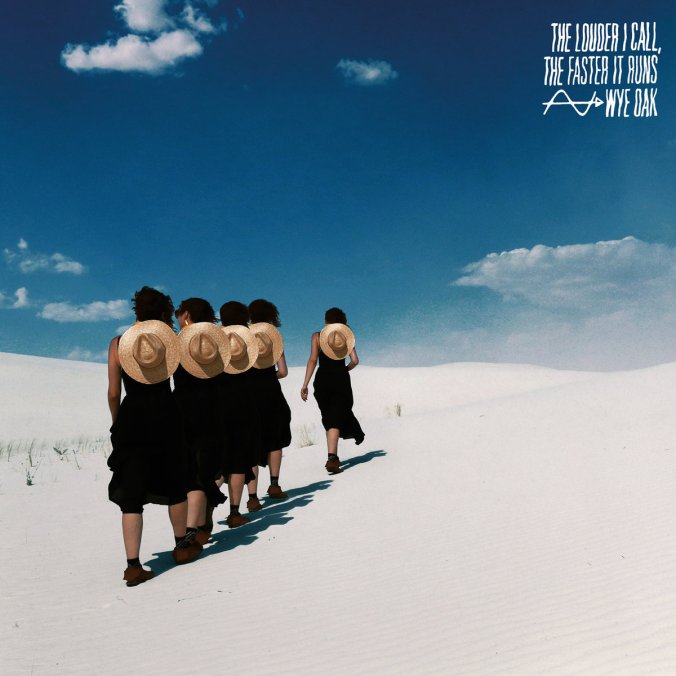